Victory Day commemorates the Russian and Soviet people defeat of the Axis Powers with their unconditional surrender on  May 8 1945. Due to the time difference, it was after midnight in Moscow where it was May 9th.
WW2 is called the Great Patriotic War in Russia.  Since the 1960s it has been an official holiday but first observed in 1945.  The day has grown in importance to the society, to keep the memory alive of what the people did, and suffered as victims of, and eventual victors in the most deadly war in human history. Not a family was spared so it is not surprising each generation has kept the memories alive.
An addition to the formal parades, speeches, and public events there has been a citizen-organized march that has grown in participation called the “Immortal Regiment” and this year nearly 1,000,000 citizens marched 3.5 km from Uprising Square to Palace Square, as a walk more than march, each holding photos of relatives who served in the war effort.  Each year the formal parades featured elderly participants in the war but their number has steadily decreased as age has reduced the number still alive. While the first generation has become less and less the second, third and fourth generation have picked up the tradition and this year, the number of family members of all ages participating set new records 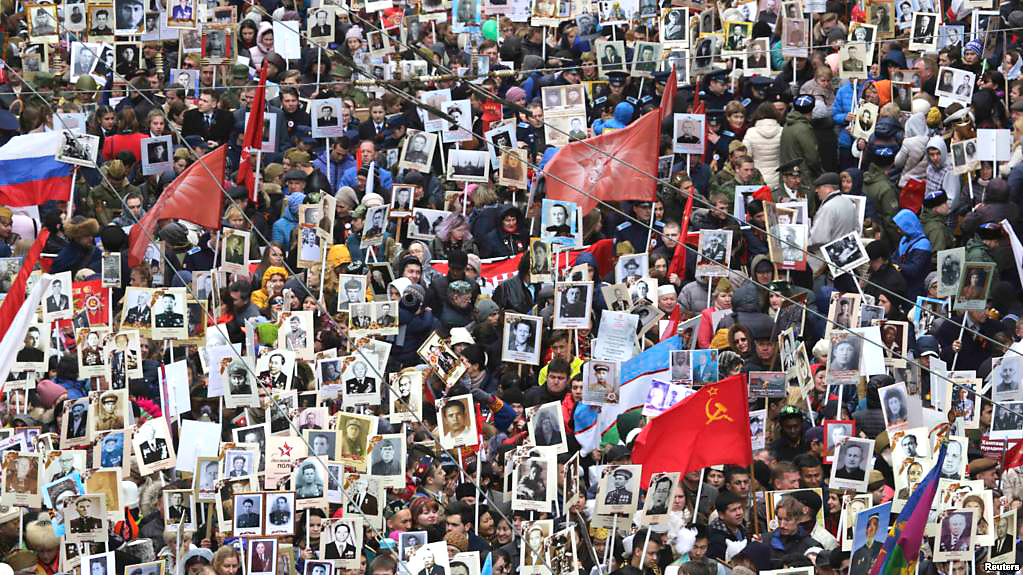 Summer is fast approaching and while the flowers and leaves are not out in much abundance the air and longer sun hours make one want to go out and walk around the city.  Doing that yesterday during preparations for the May 9 Victory Day parades and civic events, thousands of others were out in the moderate temperatures and warm bright sun. The usual places to congregate were filled but much of the main street, the wide historic Nevsky Prospect was closed off for traffic, in order to resurface and stripe the street meant many thousands were strolling that popular area in the street instead of the usually busy sidewalks.

The mood was light and festive in the runup to a commemoration of a very serious national event, the winning of WW2 May 9   1945.  It will feature a massive parade with 250,000 citizens marking with large photos of their relatives who died in that war. 27 million of their countrymen died, both military and civilians defending the country and defeating the most powerful army of up tpo that time in history.  No family was untouched.

In addition to the parade, in all cities of Russia, will be concerts, parades of military units flybys of all the combat models of aircraft, tanks and rocket launchers

Symbols of the events seen throughout are orange black ribbons worn by many, the St. George ribbon which is a sign of respect and remembrance.  Also seen are red carnation flowers worn or placed on monuments and graves as the symbol of the Red Army and national flag.
The most moving and participated in event is the  march of family members who hold large photos of their relatives who served or died in the invasion. Called the Immortal Regiment, this event has become a tradition since 1992 and spread to 60 countries. About 10,000,000 people will participate throughout Russia.